The official archives of the Finnish Defense Forces are home to thousands of photos taken during the Finnish WWII era. We’ve highlighted some particularly striking color photos of Finnish soldiers from their collection before, but this time, we thought we’d feature something that remains an icon of Finnish culture: the sauna.

In Finland, which remained a poor and rugged place until post-war industrialization, the sauna played a central part in society. Not only were they were important in maintaining personal hygiene in the dark times before showers, but life often began and ended in the sauna. Childbirths took place in their cleanly environments, and the deceased were sometimes prepared for burial in them. Finns have been socializing, cleaning, and even cooking in saunas for centuries, so it’s easy to see why the sauna is such a huge part of Finnish culture even today.

Naturally, Finnish soldiers during the WWII era needed access to the sauna. Soldiers were known to light up any usable sauna they happened across in the field. When there were no usable saunas in sight, the soldiers would do what any sensible Finn would do—they built their own sauna. Sometimes using logs, and sometimes using only the terrain, Finnish soldiers could have a working sauna up and smoking in a matter of hours. In order not to give away their position with tell-tale sauna smoke, Finnish soldiers on the front lines would usually only light it up at night, getting in and out as quickly as possible. Soldiers in more remote locations had the luxury of enjoying their steams a bit longer.

We could go on and on about the wonders of the sauna, but don’t just take our word for it. Take a look at these amazing photos with translations of the original Finnish captions. They depict the Finnish soldiers of WWII who built and used saunas, even during wartime—one drop of sweat at a time.

Finnish soldiers at a sauna at a lake in Ponkalahti. July 7th, 1941.

Engineers (“Pioneers” in Finnish terminology) built a sauna in the wilderness of Pajarinjärvi on the shore of Mustajoki. The sauna, where the sooty soldiers cleaned, is available from morning to evening. August 13th, 1941.

Finns still need sauna while at war. “Wilderness saunas” were common in the Karelian wilderness. This one was located approximately 15 km east of Nurmijärvi. September 18th, 1941.

The sauna’s heat was too much, and this guy went for a roll in the snow. Karhumäki. December 24th, 1941.

Bringing water to the sauna with a sled. Rukajärvi. March 5th, 1942.

Sunday sauna on the shore of Pieni Karmanlampi. October 12th, 1941.

Sauna built in the terrain at engineer camp 10 km east of Tiiksjärvi. The crew started building the sauna at 10pm and used it for the first time around 4am. August 9th, 1941.

Without access to a sauna, life would be too much to handle. Especially during wartime. This is one of the frontline wilderness saunas. Valkeasaari. October 6th, 1941. 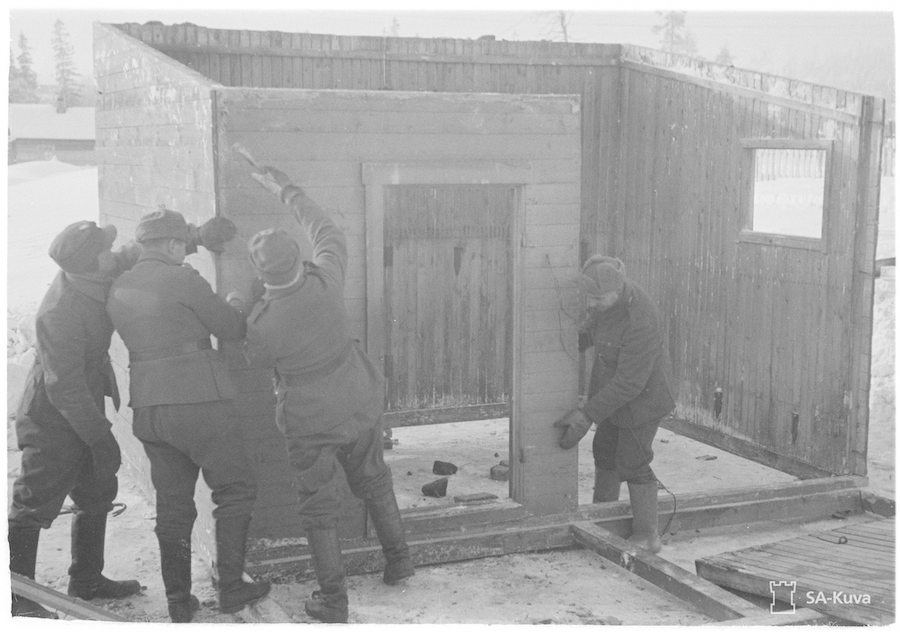 The sauna got built in an hour, and was heated and ready to use within two hours. Karhumäki February 7th, 1942.