In the five years, I lived in Amsterdam, I learned to love many things about Dutch culture, from their passion for King’s Day to their love of cycling. However, there was one thing, that no matter how hard they try, the Dutch will never master and no Finn will ever enjoy and that’s Dutch sauna. Don’t believe me? Here are seven reasons to avoid them at all costs.

The first sauna I went to in the Netherlands was in our gym. It was a mixed sauna where people wore towels and it was the first time I learned that the sauna’s “a quiet room”. The sign appeared on the sauna door a couple of times after I’d been there with my husband. We’d been talking about how our days went, just as you would over dinner. Yet this was considered noisy. It’s rare a Finn ever gets accused of being too loud or talkative. Nonetheless, despite, my surprise, I kept quiet as sauna mouse from then on.

2. Sometimes people wear too much

No Finn likes going to the sauna wearing a towel. It gets all sweaty and it just doesn’t feel right. However, when you’ve no other choice you bite the bullet and get on with it. This resolves disappeared when one day I had to share a bench with a bunch of guys wearing their sweaty boxer shorts after a workout. I love my sauna, but there really is only so much a Finn can take.

After that, I went looking for the perfect sauna in different spas. The first shock – surprisingly – was that many Dutch spas are no-swimsuit and mixed-sex spas. In Finland, public saunas and pools have different dressing rooms and saunas for men and women, and in the pool areas, you always wear swimming suits. I got over the shock relatively quickly, because, well, I needed a new sauna. Talking about my “naked” spa surprise with the Dutch, I discovered that lots of the Dutch wanted to go to spas but the fear of running into their boss or colleagues naked was too big to overcome.

4. Men and women get naked together

I also realised the interesting difference in Dutch and Finnish sauna cultures: for Finns, it is ok to go to the sauna with your family, friends and yes, even colleagues, but the idea of a mixed spa with people you don’t know feels weird. I guess for Dutch the idea of going to a mixed spa is still better than going to sauna with friends, not to mention colleagues.

5. Exhibitionists let it all hang out

I went regularly to spas in the Netherlands and learned to enjoy the abundance of services and different kinds of pools they offer. I also found a couple of ok saunas. However, this pleasure was sometimes tainted by people laying naked outside, on the spa lawn, in the autumn when the temperature certaintly doesn’t encourage you to rip your clothes off.  I often wondered whether they were unconcious, having sex or dead, but I never checked. The most bizarre though were the exhibitionists who’d place a chair just in front of an entrance so that everyone got to enjoy a view of their carefully arranged manhood.

6. They have the wrong equipment

As well as exhibitionists, Dutch saunas have hourglasses on the wall. This allows people to carefully follow exactly how much time they’ve spent sweating. They never leave until their time is up, even if they’re dangerous close to fainting.  What’s more, you’ll rarely find a water bucket or the stove. You can just hear the electric ticking of the sauna stove somewhere, but there is no access to it for the sauna goers. This type of a sauna makes a Finn wonder whether someone’s playing a cruel prank. If the sauna’s too cold and there is absolutely nothing you can do about it. This type of sauna should be banned, worldwide. 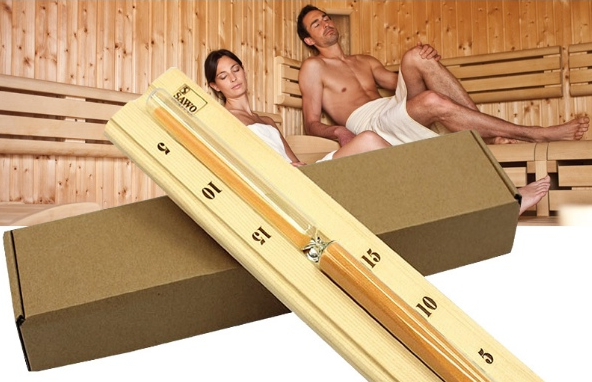 7. They can’t handle the heat

Incredibly, I’ve also had a big argument in a spa sauna… Christmas eve.  Apparently, I threw too much water on the stones. I’m not proud of it, but just that you know: I threw less than half of the amount I wanted to as a Christmas gesture of goodwill to all the meditating, hourglass-watching sauna amateurs.

A lot of things have been difficult and are driving me crazy now that I’ve moved back to Finland, but a sauna is not one of them. As you’d expect from the country that gave sauna to the world, the sauna situation in Suomi is fantastic. So, if you’re going to the Netherlands be sure to wonder at their windmills and top up on their tulips, but save the sauna until you get home.

Kirsi Kurkijärvi is the Founder and Editor of Goodlifejar.com. She studied Russian Literature in Tampere and St. Petersburg and is a co-editor and contributor of Mapping Experience in Polish and Russian Women’s Writing. After five expat years in Amsterdam, she’s back in Helsinki and writing about Finnish life and culture.