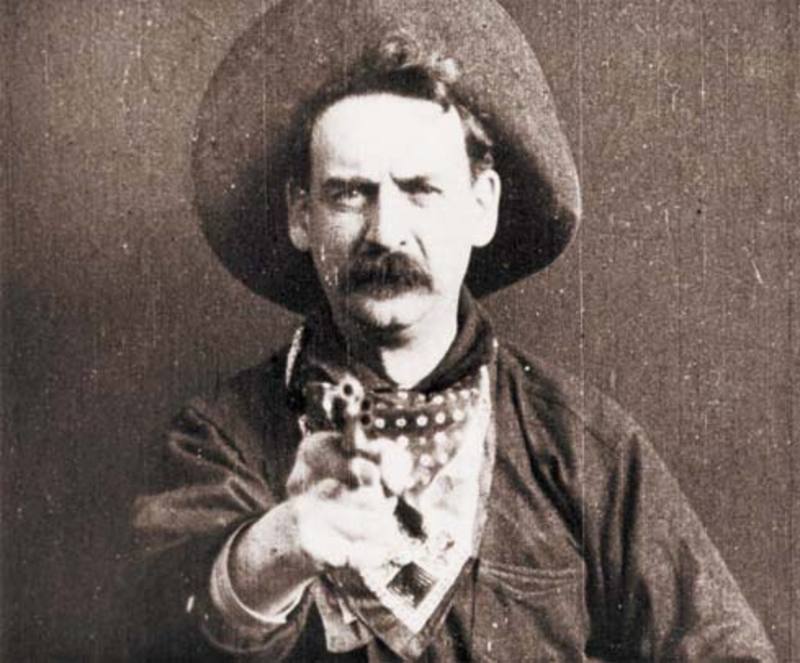 Silent film actor Justus D. Barnes in the famous ending scene from The Great Train Robbery (1903). The movie is considered the first American action and Western flick in filmmaking history.

The first use of animation in movies was Matches: An Appeal, a thirty-second short in which stop motion match figures asked British moviegoers to send matches to soldiers fighting in the Boer War. Propaganda and patriotism later became a frequent theme in movies, especially when the industry established itself in Hollywood after the First World War.

The world’s first theater devoted exclusively to moving pictures appeared in Pittsburgh in 1905. Its founders called the place Nickelodeon, from the price of admission (a nickel) and “Odeon” the ancient Greek word for theatre. With opening hours from 8 am to midnight, the theatre could serve up to 7000 daily.

Production still from the 1902 French silent movie A Trip to the Moon (Le Voyage dans la Lune). Internationally acclaimed (and pirated) thanks to stellar production values and unusual focus on story, the movie has become something of an icon of its era.

Early cinema often took place on poorly constructed temporary venues. As film prints were from highly flammable cellulose nitrate and limelight illumination, filmgoer faced significant fire hazard. In Britain, incidents like the one mentioned in this newspaper clipping motivated legislators to pass The Cinematograph Act of 1909, one of the first attempts to regulate the movie industry. Perhaps unsurprisingly, the law also introduced legal grounds for censorship and paved the way for British Board of Film Censors, established in 1912.

Thomas Edison (on the right, pictured here in 1928 in the company of Kodak founder George Eastman) is still considered something of a patron saint of innovation. But it’s no longer controversial to state that his hard-handed business centered around patent litigation could have killed off the motion picture industry. Ars Technica has a fine piece on the subject.

Early Swedish filmmaker Victor Sjöström, here with Ingmar Bergman, started his career in his homeland but moved to California in the early 1920s. Unsurprisingly, people around the world quickly came to appreciate movies. But the European film industry was badly held back by the First World War and a budding, very original film culture in Russia died off after the Bolshevik revolution. Consequently, during the first half of the 20th century Hollywood became the main movie industry location.

In the Anglosphere, newsreel movies quickly became popular around 1910 to be surpassed only after television mass ownership took off after WWII. Theaters started to specialize on short-form news reporting and documentaries. Content was supplied from numerous production companies, including subsidiaries of the major motion picture studios. Depicted above is a newsreel theater in Los Angeles near the end of World War II in 1945.

With the 1950s came the advent of television sets in every home. Studios used Cinemascope and VistaVision in a desperate attempt to lure viewers back to theaters. In this decade, we also saw the arrival of drive-in movies and science-fiction films, featuring aliens as substitutes for the Communist menace to the East.

Alfie, starring Michael Caine, was one of many incredible movies shot in the UK during the 1960s. Thanks to the ever-increasing cost of making films in Hollywood and the shrinking size of studios, many studios began making movies abroad, mainly in Britain. Britain cinema also experienced a new wave of grim, non-fictional, social realism in British cinema, dubbed or styled “Kitchen Sink” due to its angry, everyday working-class heroes, frank dialogue, and negative post-war themes. Most of the directors had backgrounds in theatre, television and documentaries and brought their talents to the screen.

The Italian film director Sergio Leone, here filming Henry Fonda in Once Upon a Time in the West, was part of a trend sweeping 1970s America. By the mid-1970s, 76% of all American movie-goers were under 30, 64% of whom had gone to college. Consequently, European art films, in particular, Commedia all’italiana, the French New Wave, and the Spaghetti Western as well as Japanese cinema were all making a splash in the United States.

The 1980s was characterized by the introduction of ‘high-concept’ films, such as Ghostbusters, with cinematic plots that could be easily characterized by one or two sentences and therefore easily marketable and understandable. Producer Don Simpson and Jerry Bruckheimer has been credited with the creation of the high-concept picture or modern Hollywood blockbuster.  Although its roots could be seen in the late 70s with movies such as Jaws (1975), Saturday Night Fever (1977), Star Wars (1977), Alien (1979) – known in high-concept terms as “Jaws in Space”

This scene from the classic 1999 movie, The Matrix, by the Wachowskis underlines how the 1990s heralded a digital revolution, with pioneering film-makers experimenting with making digital-video (DV) films, pushing digital imagery and special effects or projecting films digitally. A number of films also used special-effects CGI in more subtle, innovative ways.


The 2000s had a profound effect on filmmaking, with the ascendancy of Google, Amazon, YouTube combined and tech products such as the ubiquitous laptops and smartphones, filmmaking became democratized.  No longer did you need a big budget or a fancy camera to create a movie and find a platform from which to broadcast it. The Nails is a great example of the possibilities of smartphone cinematography. This incredibly scary little short film made by Clement Deneux for the 2011 Disposable Film Festival, a film festival dedicated to short films shot on smartphones and either pocketable cameras, won first prize and no wonder. Be warned the violence and supernatural horror means it’s probably not safe for work.

Which brings us to the present day, where becoming a filmmaker is now a possibility for more people than at any other time in human history. This can be seen by the wealth of filmmaking apps, such as LUUP, which help people learn their trade on an iPhone, and by movements such as “mumblecore”, whose members, rather than trying to make low budget versions of high-end Hollywood films, ignore the commercial marketplace. Instead they, and making the movies they want to make on their own terms. At the forefront of these filmmakers are folks like Andrew Bujalski, Joe Swanberg, Aaron Katz, and Mark and Jay Duplass.