With its 187 888 lakes, sub 30 degree winters, sauna-obsession and insane coffee-drinking, Finland is in many ways a wonderfully unique country. This special quality is reflected by its news stories too. Pick up a Finnish newspaper and you’ll doubtless find plenty of articles, which mirror life elsewhere in the world. However, it’s likely you’ll also discover a very uniquely Finnish story. Still need convincing? Check out this selection of recent headlines, to see for yourself.

Only this week, a young elk got loose in central Helsinki. Confused and stumbling around, the poor animal charged down busy streets and even crashed through the window of a bank before it was, sadly, shot outside Finland’s famed rock church. Needless to say, the tabloids went to town with the story. 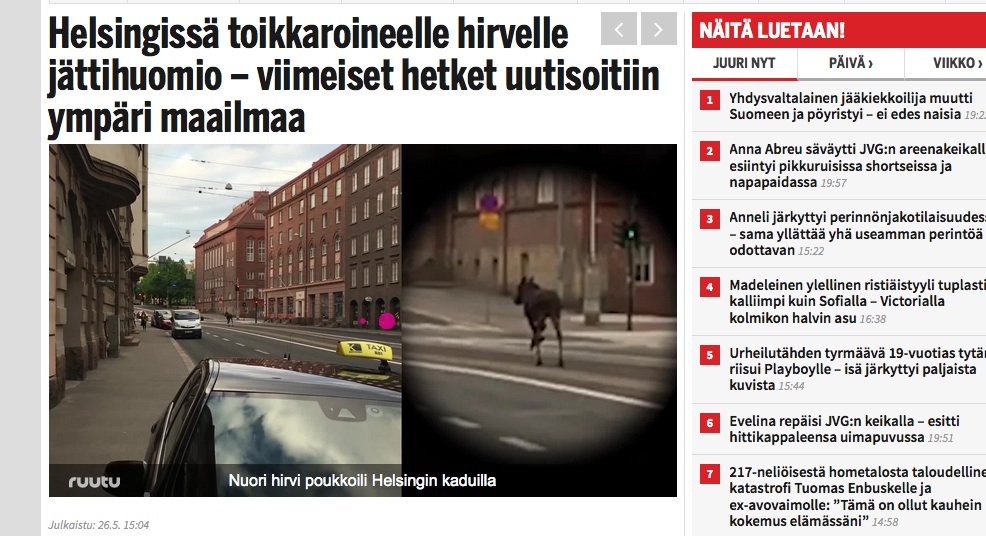 While this sort of thing isn’t a common occurrence, it does go to show Finland’s strange relationship with urbanization and nature. Even if you live in Helsinki it’s very easy to find your way to into the wilderness. Anyone who has ever landed at the forest-encircled Helsinki-Vantaa airport can see why. Consequently, stories of wolves and bear marauding through towns are pretty standard fare. This is especially the case because so many Finns are still genuinely attached to nature, and live a bizarro-suburban lifestyle, which would be considered the utter wilderness to the rest of the world.

In most countries, the head of state acts in a stately, often aloof, way. Not in Finland. The current president, Sauli Niinistö, has no qualms about calling radio shows or taking selfies with students while jogging. The previous president, Tarja Halonen is living hipster life in the Kallio-Hakaniemi region to the point of being spotted dumpster diving for vintage picture frames.

Finland is a relatively classless society and one where the government is extremely accessible to the people, both literally and figuratively. Consequently, the president who has little actual power, but a hugely symbolic influence, tends to act like an everyday citizen. At least, that’s increasingly the tendency after the 30-year reign of Kekkonen, who during the Cold War managed to maintain an air of the chosen one to “neutrally” deal with the Soviets, a scary totalitarian neighbour, and trading partner.

3. “Thousands of people queue for hours for… free buckets”

We can’t claim that store opening events in Finland are always entirely free of the tension, yet unlike elsewhere things rarely get out of hand. However, for the past few years, news outlets have been loving the story of chain stores opening with special offers and limited free giveaways. Sometimes, the free giveaway is a bucket. And some people stand in neat lines for those… for hours. 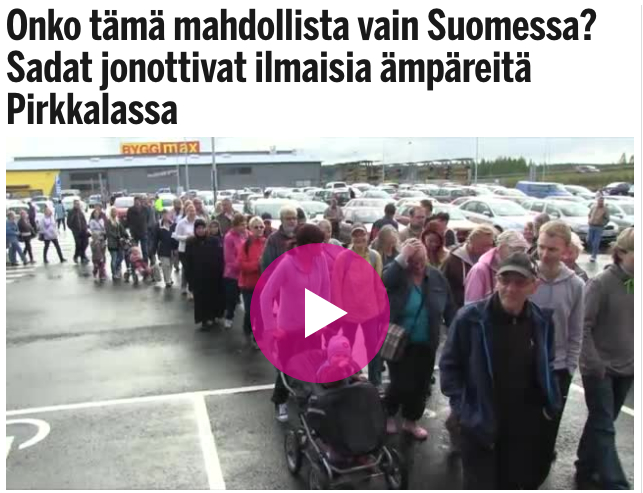 With unemployment being what it is we’d be speaking from a place of clueless privilege by saying no-one’s time is worth waiting for cheap electronics. But branded buckets worth a couple of euros? It’s true these buckets often come spiked with little extras, such as a pack of coffee or gift cards. Cheapo store Tokmanni in particular is a master of the bucket phenomenon. Speculation on the motivation of people standing in line for buckets are rampant: seeking a brief communal event, and a false sense of accomplishment are often suggested. But one thing is for sure: Finns love a freebie.

4. “101 ways to discover how much your neighbours earn” 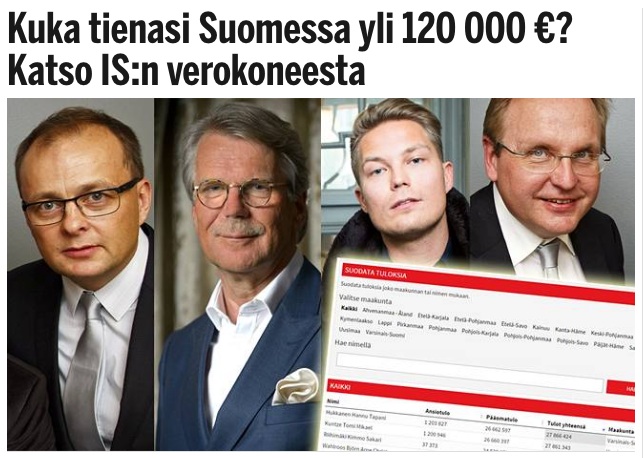 Dude, where’s my privacy? Or… praise the Nordic utopia? At least this has the consequence of nominally proving equal treatment at the tax office. Although it’s a valid gesture it’s still not enough in the face of rampant global tax evasion. But it does reveal smooth operators who receive a nominal wage that’s padded out with capital gains, which are taxed way less.

It’s hard to say just where this falls on the scale of radical transparency to small- minded neighbor snooping. Finland, and cultures based on a legacy of small communities are sometimes plagued by what the Norwegian author Aksel Sandemose called The Law of Jante: Don’t think that you’re better than anyone else.

How’s that for fostering the next Nokia?

It really doesn’t pay to speed in Finland…unless you’re the state. While speeding tickets elsewhere are a minor irritant, in Finland you’re billed based on your earnings. Recently, one person’s outrage over this practice reached international news, as businessman Reima Kuisla vented publicly about a € 54,000 fine. However, that’s nowhere near the highest fine handed out for speeding – in 2002, a Nokia exec had a little too much fun on his motorcycle and ended up with a ticket of € 103,000. NHL star Teemu Selänne has also experienced the business end of progressive fines, paying around € 39,000 a couple of years earlier.

As already mentioned, Finland is well known for partially progressive taxation, in particular, for of certain kinds of income. If you earn more, you pay more. With the likewise mentioned, significantly lower flat tax on capital gains, high earners sometimes end up paying a much smaller share of their income than typical salaried workers. The 100K speeding fine underlines the determination of the state to keep the playing field or, in this case, motorway level.

Finns love sauna. It’s relaxing and excellent for hygiene. A sauna is something you build, even if you’re at war. If you needed proof that sauna is a shortcut to the hearts and minds of Finns, look no further than the story of Burger King, who decided to open a rentable branded sauna for business meetings at their central Helsinki branch. For the intended audience, this may be more than enough compensation for Burger King’s notoriously slow arrival in Finland. The chain returned in 2013, after a brief stint way back in the 80s.

While one might get lost in questions about the… uhm taste of sweating at a Burger King, it’s worth noting that Finns of all ages have a love affair with food chains they’ve seen abroad. Burger King’s arrival in Helsinki was widely popular and an actual news item itself. So was Starbucks, to the degree that their piloting location at the Helsinki-Vantaa Airport became something of a destination before a store opened downtown with continuously long lines in 2013. It also says that our love affair with the sauna is in no danger of ending anytime soon.